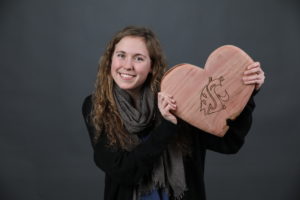 Serena Ranney is a senior studying Food Science. Growing up on a tree farm in Shelton,
Washington and spending high school summers commercial fishing in Alaska, she quickly
learned the value of hard work and the importance of those supplying our vital resources. At
WSU, her main driving force has been an appreciation for the opportunities she has been given
and a love for serving others, and she has shown that in her heavy involvement in a community
service club (coordinating student efforts in about 50 service projects), her dedication as a
CAHNRS Ambassador, and her work within the School of Food Science through research, Food
Science Club, and Product Development Team. A goal to make the world a better place is what
inspired her to study Food Science, and that inspiration has only grown through her interactions
with the school’s incredible faculty, students, and staff. 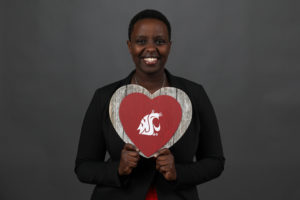 Vanessa Giramata is an international student from Rwanda,
and is a sophomore at Washington State University. She is currently pursuing a major in
Agricultural Economics, and an option in French. At Washington State University, she has
been part of the International Development Club, and she serves as a peer mentor for the
Mathematics Department. She has also started the French Club. In the future, Vanessa wants
to work on resource allocations and budgeting for the agriculture sector of her home country.
Vanessa has been able to step out of her comfort zone, try new things, dare to dream, and
grow as an individual through education. That is why she also wants to become a Professor,
so as to share the knowledge with multitudes around the world. Because she believes education
is crucial to one’s growth, and that it helps unfold the potentials that lie within each individual. 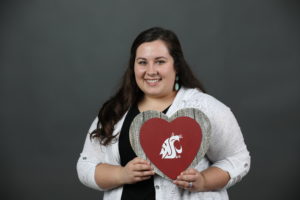 Maggie Joe Uceny is currently a thriving sophomore at Washington
State University pursuing her dream career of becoming a Family and Consumer Sciences educator.
At WSU she has immersed herself in the opportunities available to her: leadership programs, hall
government, Resident Advisor, and of course attend athletic events. Prior to attending WSU, Maggie
Joe, born and raised in Kittitas, WA, was an active member of Kittitas Secondary School. She was
the ASB President, a member of the FFA chapter and a grand champion swine showman. Maggie Joe was
active in softball, but her passion was being involved in FCCLA from the sixth grade to twelfth.
She competed nationally earning gold rating five consecutive years, held three State Officer
positions, was a National Officer candidate, and one of two student members of the National CEAT.
Following in her mother’s footsteps Maggie Joe can’t wait to make a difference in students’ lives.

Family and Consumer Scientist of the Year 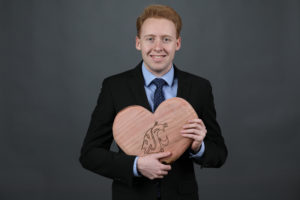 Chet Broberg is an Economics major who is in his fourth year
at Washington State University. On Campus, Broberg is an active member of FarmHouse Fraternity,
and works at WSU Student Affairs Marketing. He has been awarded with a pair of scholarships
from the College of Agricultural, Human and Natural Resource Sciences and was named the Outstanding
Junior in Human Sciences as CAHNRS Honors in 2017. In January, he concluded a year long term as the
Executive Vice President of FarmHouse, his third position on the fraternity’s executive board.
Last spring, Broberg was a member of the WSU President’s Student Advisory Board where he gave
input to President Schulz on student issues. He spent his first year at WSU working at the Daily
Evergreen, and now writes for CougCenter.com. In the fall of 2018, Broberg plans on attending
law school and has been admitted to five schools thus far, including Duke and UCLA.

Lindsay Schilperoort was born and raised in Sunnyside, WA, daughter
of a 4th generation grape farmer and is a proud 3rd generation Coug. Washington State University is
in her blood. She is seeking her undergraduate degree through the Honors College in Agricultural and
Food Business Economics, along with a minor in Spanish. She is an active member of the Beta Lambda
chapter of Alpha Kappa Psi, and is serving her second term in the ASWSU Senate as the CAHNRS Senator.
She was elected to serve as the Chair of the International Affairs Committee, working with her committee
members to vet and approve legislation for the Senate floor. Her current Senate projects include the
ASWSU Internal Review and a comprehensive update to the legislative process. 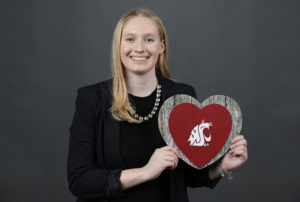 Ashley Wright is from Concord, California
studying apparel merchandising, design and textiles with emphasis on merchandising
and minoring in Business Administration Finance. She has been on Presidents Honor
Roll the past four semesters with a cumulative GPA of 3.85. She participates in
undergraduate research with Dr. Hang Liu into regenerated fibers from recycled
waste cotton; through this research she had the opportunity to be a part of the WSU
I-Corps Fall 2017 cohort as Academic Lead. Ashley enjoys being a Marketing Intern
at the International Center on campus and promoting CottonWorks to emerging
professionals. After graduation she hopes to either attend graduate school or state
to make her difference at an outdoor apparel company. 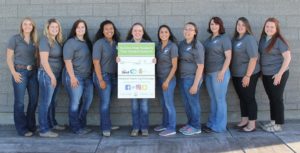 The Agricultural Education Club, (AgEd) is comprised of 38 members, and 6 Officers,
all of whom are CAHNRS Students. Highlights of AgEd activities include, industry tours
to the Wenatchee Valley, Columbia Basin, and Walla Walla, District 6 Agricultural and the
Development Event Coordination for State FFA Agronomy District 6 Agricultural Mechanics.
AgEd Club also facilitates in WSU activities such as CAHNRS Fall Festival, CAHNRS Senate
Representation, and CAHNRS Honors. The AgEg Club works closely, and developed a strong
relationship with the Washington FFA Association and often work together to create valuable,
intentional learning opportunities for the State of Washington’s FFA members. In addition,
the AgEd Club entirely created the 2017 State Agronomy Career Development Event. The creation
of this event helps foster the type of critical thinking required for success in agriculture.