May 2010 wasn’t the best time for Heath and Tish Barnes to launch their new hummus business. The bad economy aside, Bronzestone Hummus was competing with not only big-name U.S. labels like Sabra and Tribe, but also with other companies introducing their brands at the same time. But the Barneses had a huge advantage: Washingtonians, especially on the west side of the state, want locally grown food, and Bronzestone is the only hummus manufacturer that uses chickpeas directly from the family farm, located 60 miles from its Clarkston, Wash., plant.

“Many of our other ingredients are also sourced locally, making us the only hummus company that uses Pacific Northwest-grown products and 100 percent Washington-grown chickpeas,” said Heath, who graduated from Washington State University in 2000 with a degree in agricultural marketing. “We believe in the smaller farm-to-table concept, so people know where their food is coming from. I think this is one thing that small companies can do that the big-name brands just can’t match.” 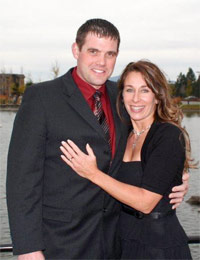 Now more than a year later, Bronzestone Hummus, named for the rich color and smooth texture of its product, has expanded its market presence to stores and cooperatives in Washington, Idaho, Oregon and Montana, including Albertson’s, Metropolitan Market, Moscow Food Cooperative, New Seasons Market, Rosauers, Super 1 Foods, Thriftway and Yoke’s Fresh Markets. In addition, local restaurants in Pullman, Clarkston and Lewiston have introduced their customers to Bronzestone through their appetizer selections. And the Barneses continue to set their sights higher.

“We are also working on expanding our food-service business through the Interstate 5 corridor, with a possible nationwide deal that would place our products in a snack pack being served in an elite chain across the nation,” Heath said. “We are hoping to grow our business in the next five years to hit somewhat of a national stage, mainly in the food-service industry.”

Not bad for a pair that initially started with a few hummus recipes they shared with only family and friends. Fueled by their support, the couple put together a business plan and presentation, then entered the 2009 WSU Business Plan Competition, which they won, taking home the $10,000 first-place prize—and the seed money for Bronzestone.

Getting to where they are today hasn’t come without its challenges, Heath said. He and Tish work seven days a week with help from their children on every aspect of Bronzestone’s operation, from hand-selecting producers, soaking and cooking garbanzo beans, roasting red bell peppers, garlic and onions, and blending the hummus to sealing it in 10-ounce tubs, packing them in boxes and delivering them to their buyers.

Pricing their product is also a challenge. It costs more to ensure only all-natural, local ingredients are used in Bronzestone Hummus, Heath said, yet they must match the retail value of other hummus brands in stores.

“We thought because we had a product that was better in flavor and local, using only the finest ingredients, that we could command somewhat of a premium for our product,” he said. “We were wrong.”

But possibly even more difficult was convincing others to give their hummus a try. “We have spent countless hours doing in-store demos and free samplings of every kind,” Heath said. “Probably the biggest battle is trying to secure shelf space and, once on the shelf, keeping that shelf space.”

Still, the Barneses know that their business is supporting a more sustainable form of agriculture long term. “We work with farmers who employ sustainable practices that take care of the ground in a way that will leave future production possible for generations to come,” Heath said. “We will not sacrifice quality for a profit. That is, in my opinion, the difference between the small guy and the big names.”