Jack Friel, who coached Washington State University men’s basketball team from 1928 through 1957, would have loved the scrappy team put together by Tony Bennett.

“He would have loved the way these kids who are short of talent, compared with other schools, play so well and are so well coached,” said his son, retired Superior Court Judge Wally Friel, who spent a good share of his childhood learning about life and basketball at his father’s side in Boehler Gym.

John B. (Jack) Friel, who was born in Waterville in 1898, was a great athlete himself. He starred in both basketball and baseball in high school and lettered in both sports at Washington State. While in college, he was an all-conference pick in basketball in 1922.

He accepted a high school teaching and coaching job in Colville after earning his B.A. in economics in 1923. He coached basketball and baseball and served as assistant football coach for three years there before moving to Spokane in 1926 where he taught and coached at North Central High. One of his North Central basketball teams won the state championship.

“Then, Dr. J. Fred Boehler wanted to get rid of coaching (at Washington State) and just be athletic director, and dad got the job in 1928,” Wally recalls.

While at WSU, Friel’s basketball teams (he also coached freshman baseball and golf) won 495 games and five Coast Conference divisional titles. In 1941, the Cougars nearly won it all. “They were national runners-up in ’41,” Wally said. “They had beaten two better teams than Wisconsin (Creighton 48-39 and Arkansas 64-53) before losing to Wisconsin 39-34.”

Wally believes that the 1942-43 Washington State team could have been just as good. “No big men, but they were all fast as lightning, good ball handlers, could shoot and they ran a five-man weave. He would have gone to the national championships again, I think, but the war was on. Many players had joined the Army Reserves to try to get one more basketball season, and a day or two before the Oregon trip, they were all called up.”

What was it like growing up in those days? “It was wonderful to grow up in Boehler Gym. I’d get to be at all the practices until I was older and playing ball,” Wally recalls. I know all the athletes, especially during the 40’s. The first players I remember were in ’37. We had four players bunking in our basement on Garfield Street. Getting to know them was a lot of fun.”

His father, a student of the game and a member of the NCAA Rules Committee, pushed hard for the adoption of the one and one free throw rule in the Pacific Coast Conference and is credited for inventing and using the two-platoon system of substitution.

“He would send in five new players all at once late in the first quarter, and they would try to run the other team to death,” Wally recalls. “Some pooh-poohed it, but every club had to do it or they couldn’t keep up.” 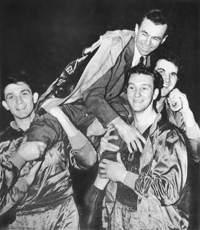 In the days before the shot clock, Friel’s teams would break down zone defenses with relentless passing. “What he would do is simply pass the ball until they (the opponents) were tired. The passing players weren’t moving, but the zone had to move every single time. He would beat Oregon State teams with better personnel doing that.”

His father was a scholar as well as a coach, Wally recalls. “He was an econ major and would quote profs and talk about Keynesian economics. His reading throughout life was history and politics.”

Coach Friel was also a great story teller. “In those days after the game, the visiting coach would often come home, and they would spin stories all night. I would get to hear them until I went to bed,” Wally recalls.

Friel retired from coaching in 1958 but continued to teach until 1963 when he was persuaded to become the first commissioner of the Big Sky Conference. “Skip Staley, the football coach at Idaho, and Hank Anderson, the basketball coach at Gonzaga, were instrumental in his starting the league. They asked him if he would do it. He said, ‘I’ll do it if I get an office in Pullman.’ He ran the whole league (from 1963-71), observed his own officials, assigned them out and did everything. They have an army doing that now.”

He attended Cougar basketball games until he was physically unable to do so and continued to follow the team on television when he couldn’t. For many of those years, he was a Pac 10 observer for officials, his son recalls.

In 1971, Coach Friel received WSU’s Alumni Achievement Award for his contributions to the game of basketball. In 1977, he received the prestigious Metropolitan Award from the National Basketball Coaches Association. He also was inducted into the State of Washington Sports Hall of Fame.

Friel Court, home court of Cougar basketball at the Beasley Performing Arts Coliseum is named in honor of Jack Friel.

Coach Friel passed away in 1995 at the age 97. He left behind his wife of 69 years Catherine, four children, three who graduated from WSU, and an unmatched record of accomplishment at WSU.