Jeanne Youngquist got her first glimpse of the Washington State University campus when she came to Pullman as a teenager to attend a 4-H camp. “I loved it and I didn’t apply anyplace else,” she said.

She enrolled in 1962 and became active in sports, student government and the Cougarettes drill team, serving as both captain and president of that organization over the course of her college career. She also served on the Athletic Council for two years the student organization responsible for selecting the “Cougar Athlete of the week”.

“I had some great teachers, that posed some real questions that really made you think,” Jeanne remembers. “I always thought the professors that made us do a lot of work also had to do a lot of work to keep up with us. I admired them.” 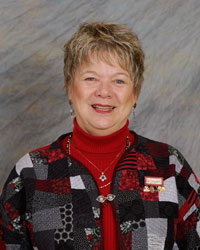 After graduation, the home economics education major taught at Mount Vernon High for three years. With the birth of second child, Jeanne took a leave of absence from teaching and began helping on the family farm — Mike and Jeanne’s Berry Farm. The fifth generation family farm produces premium strawberries; raspberries; cucumbers; cauliflower; peas; and spinach, beet and cabbage seed. During the peak of harvest, more than 300 people are employed on the farm. Some seasonal workers have returned year-to-year to work there.

The Youngquists have kept pace with changes in agriculture and the food industry to remain competitive. They process as well as grow and now invest an increasing amount of effort developing markets.

“We are one of the few growers of cauliflower that compete with the Salinas,” she said. Most of the nation’s cauliflower is grown in the Salinas Valley of California.

Jeanne is proud of niche market the couple has been able to develop for berries.

“We grow and pack berries. Rotary and Kiwanis clubs, museums and schools order them from us for fundraisers. They win because they pocket money for their community service projects. We win because we get a little bit more money for our product and the consumer wins because in the end they get a better product.”

In 1995, Jeanne wrote and received a grant through the Washington Department of Community, Trade and Economic Development to open a child care facility at the farm. The Berry Good School, a non-profit daycare and pre-school, serves clientele both on and off the farm. The facility is licensed to care for 45 children. The school goal is to work towards accreditation and co-coordinates the Light Span bilingual education program, with local school districts.

The Youngquists make their seasonal housing available through the Skagit County Community Action for transitional, emergency and homeless housing needs.

Jeanne served on Gov. Mike Lowery’s Task Force on Health Care. She and Mike have worked with the Washington State Housing Authority to make better housing available for seasonal workers. And that’s just the tip of the iceberg.

The couple also has been active in the Farm Bureau, Jeanne serving on the Cascade Harvest Coalition, the Heart of Washington, Skagitonians to Preserve Farmland, Northwest Ag Business Center, a variety of organizations interested in keeping agriculture viable in western Washington.

“It is our belief that a business has a responsibility to its community and its employees,” she said. “We invest in the future of our community and continue to be involved in organizations that are responsible for a positive future for our community, state, nation and agricultural business.”

Jeanne recently took her experience to the public sector. She is now serving as auditor of Skagit County.

Over the years, Jeanne and Mike have received numerous honors. They received the WSU Alumni Achievement Award in 2004. Their citation reads “Their leadership and membership in the community, regional and national organizations has brought recognition to Washington State University”.