Because of her efforts, Stewart received the Alumni Achievement Award in 2005. She currently lives in Lola, Mont. but made the trip to Pullman for the dedication of the College of Agriculture, Human, and Natural Resource Sciences Hall of Honored Alumni and Friends in October. 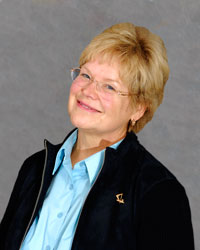 While growing up in Marysville, Wash., Stewart was active in Future Homemakers of America throughout high school, eventually serving as a state officer.

“Everyone from my family went to WSU, so it was a natural choice for me,” Stewart said.

Coming into college, she knew she would study home economics but was surprised by the number of science classes the degree involved. “Chemistry was very hard and I had to take three semesters of it,” she said.

Stewart enjoyed campus life and was active in residence hall leadership and class government. She graduated from WSU in 1966 with a BS in home economics education and again in 1973 with her master’s in vocational education.

With a three-page resume, Stewart’s professional career is filled with numerous leadership roles, activities, presentations, publications, and work experience. Along with all the grants she earned for schools, Stewart lists awards, including “Montana Family and Consumer Sciences Teacher of the Year” and “ Montana FCS Professional of the Year.”

Although she could go on and on about her various accomplishments, it was a scrapbook of students that Stewart was most proud of. Pictures of new playground equipment, students presenting work at a state convention, and some from the after-school program Stewart began in Victor, Mont. highlight Stewart’s reasoning behind all the time spent writing grants.

“Without grant money, students miss out on a lot of opportunities. I was happy to work beyond school hours writing grants so they could enjoy school and participate in positive activities after school,” she said.

For Stewart, being a Coug is all about the pride behind wearing crimson and grey. “There is always a feeling of pride when you think of WSU,” she said.