Ask Lawrence Brown why he and his wife, Elizabeth, established an endowment to help support professional development for Washington State University Extension educators, and the 94-year-old Cougar’s answer is immediate and to the point.

For 38 years, the Browns served WSU Extension – he in the official capacity of an Extension county agent; she as the supportive partner. It was the anchor to a life well lived, they say.

Born in 1918 and raised on a small “scab rock and bull pine farm” right across from the Great Northern Railroad tracks on White Bluff Prairie west of Spokane, Lawrence Brown learned early the benefits of hard work and perseverance. “My parents eked out a living with hard work and entrepreneurship,” he remembers. They raised farm produce that they sold at a stand they maintained at the retail farmers market in Spokane, and supplied raw, Grade A whole milk to nearby Fort George Wright as well as to a retail bottled milk delivery route in Spokane. It was enough to support their family and get ahead. 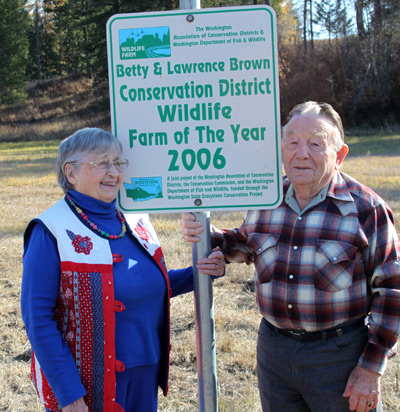 During the Great Depression, he remembers steam locomotives and strings of freight cars slowly grinding up the grade across from the family home. “It was tough times, and often as the train slowed on the grade, hoboes and bums, just guys down on their luck, would jump off looking for food,” Brown says. “I know mother never turned any of them away without a meal.”

And the difference between a hobo and bum?

“Remember, Brownie? There was a song about it. A hobo would offer to work for his meal. A bum never would,” explains Elizabeth Brown, smiling.

A self-described “son of the soil,” Brown participated in WSU Extension 4-H Youth Development activities in Spokane County for nine years, including attending the annual 4-H camp on the Pullman campus.

“Being on campus cemented my desire to go to WSC,” he says.

Brown considers himself lucky to have been able to attend then-Washington State College. While at Lewis and Clark High School in Spokane, he earned a scholarship from Union Pacific Railroad. The year was 1936, and he remembers vividly being driven by County Extension 4-H Agent Valley Long and left at the front door of Alpha Gamma Rho fraternity; “I lived there every day of my college career.”

“Those were some of the best four years in my life,” he says. “And, I’m still experiencing the positives of that very close knit brotherhood.” He ticks off the names – Art Sunderland in Dayton, Jack Tippett in Clarkston, Alexander Swantz in Bethesda, Md., Lloyd Andrews in Green Bluff. “They are the only ones left of my pledge class and era that are still living, and we still keep in touch.”

He majored in animal science. Jerry Sotolo was one of his favorite instructors. “He was an excellent professor and expected his pupils to be excellent,” Brown says. “He had a pretty thick accent, and one of his favorite expressions was ‘I gif you double flunk, if you don’t study!’”

Brown met those high expectations, though, and progressed to be one of Sotolo’s teaching assistants. He participated in sheep research, tending the flock, as well as doing some basic instruction and grading quiz papers.

Upon graduation in 1941, Brown knew the career he wanted to pursue. “No. 1 from Day 1 was extension service,” he says. That April, F.O. Balmer and Russell Turner, the director and assistant director of WSU Extension, respectively, offered him an assistant county extension agent position. He accepted.

Brown also knew with whom he wanted to spend the rest of his days. On June 22, 1941, he married the love of his life and his life partner, Elizabeth Foster.

He met Betty while both were working at her father’s “Foster’s Auto” parking lot business in Spokane under the old Union Pacific Railroad trestle facing Trent Avenue. They have been together ever since. They have three children, 11 grandchildren and numerous great-grandchildren, and Brown says that in addition to being a great wife and mother, Betty also was his professional partner. “This lady right here has been an integral part of our Extension career,” he says, still beaming at his bride of 70 years.

Betty was a professional in her own right – an expert seamstress who made her family’s clothing as well as hundreds of quilts. She served as a 4-H club leader for a quarter of a century, and is a member of Mu Beta Beta honorary. At Colorado State University, she attended summer session graduate school along with her husband. She earned an A in Stu Chase’ “Recreation Leadership” course.

The couple’s first extension assignment was in Yakima County. The starting salary was $141.67 a month. Just 10 months later, they were transferred to serve in Ferry County, where he served as county director, planning and conducting farm, home and 4-H educational programs.

“Survival was the No. 1 concern of the farm community, much like it is today,” Brown says, “and farmers were hungry for the information we in Extension had to share.”

He and Betty also remember working with members of the Confederated Colville Tribes in Ferry County. “There are no finer people in all the world that those you can find in farm families,” Brown says.

After two years as county extension director for Ferry County, he transferred to Franklin County where he served for 11 years. While in Franklin County, he volunteered and served a two-year stint in the military during World War II, earning the rank of 1st Lt. M.I. Reserve. He then transferred to Lincoln County where he served as director as well as livestock specialist. He served as president of the Washington State Extension Agents Association, earning a National Association Distinguished Service Award.

In 1966, the Browns purchased 240 acres in the Colbert area, and proceeded to become farmers in their own right. Upon retirement, they built a home, moved to the property and worked to develop “this rundown farm” into producing grain, hay and timber. They were awarded the Conservation District “Wildlife Farm of the Year Award” in 2006.

The inevitable process of navigating old age forced them to sell their home and move into Rockwood at Hawthorne Retirement center. They still oversee farming on that special place and have willed it to their three children.