Changing homes. Changing child care. Changing lives. For the children of migrant workers, the adjustments are many and dramatic. But, those adjustments aren’t quite as harsh, thanks in part to the work of Washington State University alumna Trilby Louise Gustafson. 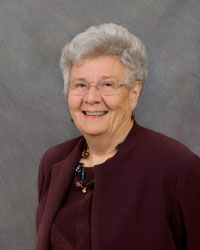 She was co-founder and project manager for Individualized Bilingual Instruction, a nationally validated preschool program serving the children of migrant and seasonal farm workers. The project has been adopted by more than 85 school districts and preschools in nine states and Mexico and has been honored by the U.S. Department of Education.

Gustafson earned bachelor’s degrees in home economics and education from WSU in 1950 and 1951 and completed her master’s degree here in 1969. She taught high school in the Tri Cities for 13 years, then joined Washington Citizens for Migrant Affairs, an agency started by fellow WSU alumna Beverly McConnell. Two years later, Gustafson transitioned to the Individual Bilingual Instruction program with the help of several school districts and ESDs serving as fiscal agents.

A long-time resident of the Tri Cities, Gustafson was well aware of the educational challenges of the children of migrant workers in the area. “They’d leave La Grulla, Texas, every spring to come north to Walla Walla, Tri Cities and the Yakima Valley to harvest asparagus,” she remembered. “Some would stay to harvest cherries, some went to the west side to harvest berries, and a few went to the Midwest. But the burden of adjustment was always on the child.”

Working with McConnell and others, Gustafson helped hire field workers to be trained as paraprofessional teachers from within the migrant worker population, which gave their students a familiar face and some educational continuity in both Washington and Texas. “In the spring, we would find places for them to have a preschool – some with as few as five or six children. Many times it was in the teacher’s own home or we would rent them space in a church or grange hall,” she said.

The same arrangements were made in Texas. With “great cooperation” from the Green Giant Corporation there, Gustafson and McConnell found and hired local educator Rafael Guerra to coordinate the program in LaGrulla.

The program had another benefit besides helping children already involved in preschool. “Part of the premise was that we hoped these women would be able to influence their own families in regard to education. And you know what? It happened,” Gustafson said.

Now retired, Gustafson has continued to volunteer her time and talent for the benefit of children. She worked with the community of the Tri-Cities to develop the Safe Harbor Crisis Nursery, which provides care for children whose families are having some type of emergency or family crisis.

She credits her WSU education for building the confidence she needed to succeed.

“I came to Pullman as a green kid. I was timid when I was on campus,” she said. But, she added, the support of mentors as well as the success of her work “began to give me the confidence that maybe I really had something to give.”