When Cougar alumni Melissa and Jim Bozich started considering how to give back to their alma mater, they focused on two things: providing a margin of excellence in the classroom that isn’t available with state funds alone and helping students.

To accomplish both objectives, they have created two endowments to support the programs from which they graduated – the Department of Animal Science in Melissa’s case, construction management for Jim.

“What we tried to do with our endowment is to fund things that aren’t necessarily funded by tax dollars,” Jim explained, “Equipment or teaching aids that would help professors who say, ‘We could do our job at an exceptional level, if we just had’ fill in the blank. We want to provide the tools to make a good program an exceptional program. And, we also wanted to help students who are putting forth the effort to succeed but are financially short.” 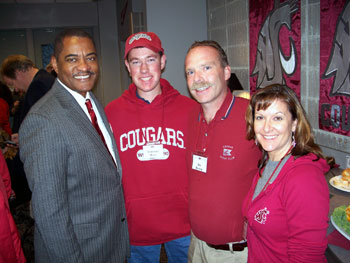 Melissa was raised on the family farm that overlooked the Redmond Valley in western Washington surrounded by extended family and, of course, animals.

“It was pretty much a storybook childhood,” she said. “I was riding a horse before I could walk. Nobody had to convince me; my favorite place to be was in the barn or with the animals.”

When it came time to go to college, Melissa knew she was WSU-bound. Her grandfather had attended the then-Washington State College, and her cousin Wendy came to Pullman just before she did. Melissa started out as a dietetics and nutrition major – following in her grandmother’s footsteps – but changed after meeting students majoring in Animal Science. “I love animals, and when I found out I could study animal nutrition, it was a no-brainer,” she said.

Mark Nelson, Fred Johnson and Joe Hillers were her favorite professors. According to Melissa, they as well as department staff “were more than happy to help you out. It didn’t matter if you were a freshman, senior or grad student, they helped you out in any way they could.”

The two met when Melissa accompanied a good friend who was visiting her boyfriend at the WSU Fire Department. “Jim happened to be on duty that day. He actually wanted to go out with my friend, but when he found out she was taken, he asked me out,” Melissa said, laughing.

“On our first date, we went to a country western dance lesson,” she remembered. “That didn’t scare him off, and we have spent every day together since.”

Jim, who attributes choosing Melissa second as a momentary lapse in judgment, ended up at WSU almost by accident.

A native of Gig Harbor, he had no intention of attending WSU. He graduated from high school in 1986, held a couple of jobs, including one with the local fire department. “One of the captains there told me that WSU was testing for new fireman, and by that time, I had enough experience to know I needed a degree,” Jim remembered. “I took the test. They called me back and said I was No. 5 on the list and they were only hiring four. Two weeks later, though, they called and said someone else had dropped out and I could have the job if I wanted it.”

The same thing happened to him in construction management. “They only took 30 students a year, and I was No. 31,” he said, laughing. “But then two weeks later, they called and said someone had dropped out and I could come if I wanted to. I’m a very lucky guy.” He lived and worked at the fire department, while attending school full time.

He said Professor Larry Fisher “played the biggest part in helping me.” Jim also remembered Professor Bill Minks. “At the time, I didn’t really understand him, but after I got into the business, I finally figured out what he was teaching.”

Both Jim and Melissa found jobs immediately after graduating from WSU – Melissa at the Leo Cook Co. in Spokane, which produced vitamins and mineral trace mixes for animal feed, Jim working for a general contractor in Spokane as well.

It wasn’t long before Jim had started his own construction firm. When the Spokane economy took a turn for the worse, the couple moved back to the west side, “an excellent decision for a new construction company,” they both agree.

Their success has made it possible to consider giving back. Jim’s ongoing struggle with stomach cancer moved up their giving timeframe.

“We had always kind of hoped to do something for the university,” Melissa said, “But, obviously, those plans have been moved up.”

They contacted the WSU Foundation and made their investments.

“For me, when you face your mortality, you ask yourself what things made a difference in your life,” says Jim Bozich, who has completed treatment for stomach cancer. “Obviously, I’m grateful for my wife, whom I love tremendously. When I look at the other things that have made a difference in my life, WSU is one of those things that really helped me.

“The other thing you look at, is what your legacy will be,” he continued. “When I die, what is there of me left? Education will always be part of our society – has been since the beginning of time. So investing in education is preserving my legacy for centuries. I’m really proud of the fact that my name will forever sit at WSU, will forever be a part of it.”