Mike Youngquist’s roots run deep in Washington – on the Skagit County farmland his family has worked for five generations, in his community and at his alma mater, Washington State University. And that has provided the base for success.

Born and raised on a dairy farm outside Mount Vernon, Youngquist grew up with a heritage of hard work, education and community service. He earned his bachelor’s degree in agriculture in 1966 and in agriculture education in 1968. The WSU alumnus owns and operates Mike and Jean’s Berry Farm, Skagit Growers a grower, packer, shipper of berries and vegetables, with his partner of more than four decades, wife Jeanne. They grow or sell Cascade Snow cauliflower, cucumbers, strawberries, raspberries and blueberries. 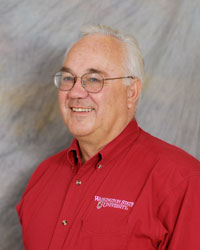 “I had been to WSU about five times before I ever started attending classes,” Youngquist said. “There was 4-H camp and the state FFA convention; we traveled by train from Everett to Spokane and then to Pullman.”

The decision to attend WSU was an easy one, he added. And when he arrived, he found mentors that would help shape his future – Tim Blosser, Eugene Forrester, Lloyd Luedecke and Mel Ehlers.

“When I was a freshman Dr. Blosser, who was dean of Animal Science, brought me into his office and showed me the plans for Hulbert Hall,” Youngquist remembered. “It was really neat to be brought into the vision of the college by an administrator.”

Youngquist later worked with Forrester, one of the founders of the college’s Food Science department. “It was great to see his plans and changes for the program,” he said. “It really turned my head around. As a student, I was just barely surviving, but then I started to understand why I was here and the purposes and my grades just shot up. Working for them really helped.”

Youngquist also worked for Forrester testing area cattle and served on the college dairy cattle judging team. “We made it to nationals one year and traveled to Waterloo, Iowa, in the backseat of a university station wagon,” he said, laughing. “I’ll never forget it – six kids and the advisor. What a trip.”

Since his graduation in the 1960s, Youngquist has put the leadership skills he learned at WSU to good use.

He was instrumental in obtaining the federal funding for and served on the board of the USDA Northwest Small Fruit Research Center in Oregon State University, leads the Northwest Growers Association and serves on the board of the Northwest Agriculture Research Foundation. He is chair of the WSU College of Agricultural, Human, and Natural Resource Sciences Advisory Council and was a founding member of the Washington Agriculture and Forestry Education Foundation.

“The foundation is something I’m most proud of,” he said. “We knew we needed to have better trained leaders in agriculture. We spent three days with Dr. Bob Howell studying a similar program in California and decided we wanted one here.”

Youngquist said that since its founding in the 1977, more than 600 individuals associated with Washington agriculture and forestry have completed the leadership program.

The Youngquists also have been recognized with a number of awards for their work in providing child care and affordable housing for migrant families who work at their farm. After winning a state CTED grant, they created The Berry Good School, a bilingual day care center they founded with the children of local farm workers in mind. They also sold some of their acreage for an affordable housing development for farm workers. As a result, they were recognized by the W.K. Kellogg Foundation as leaders in sustainable agriculture and community service in the book “Nurturing the Land and Its People.”