When WSU alumnus Richard Woods started his career in the late 1950s, small tree farm owners had just two options when it came to harvest: clear cut or do nothing. Thanks in part to his work over the past half century, a third, more sustainable alternative has become common practice.

Selection harvest – that is managing a forest stand tree by tree as opposed to all or nothing – maximizes income from forest land, but still leaves resources for the next generation. Richard Smith, an Oregon consulting forester, developed the method in the ‘50s and ’60s; Woods enhanced and promoted it.

“It’s a practice that allowed small tree farm owners to have an income on a regular basis. It spreads out the harvest,” he said. 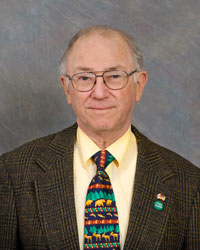 After earning his bachelor’s degree in forest management from WSU in 1958, Woods, who has lived at Kelso for much of his life, built a 50-year career in timber harvesting, marketing and appraising. Thirty of those years have been as a forest manager and consultant; he is president of his own firm, 4S TREE/NORTHWEST, Inc. He also spent six years in the 1960s as a forest appraiser for the Federal Land Bank of Spokane.

Woods has served as president of the Association of Consulting Foresters of America and the Washington Farm Forestry Association, as well as director of the Industry Forestry Association Nurseries. He was a member of the Society of American Foresters Task Force on Endangered Species Act Re-authorization in 1992. He served 18 years on the Kelso City Council and was mayor of that community for eight years. Among his many awards is the WSU Alumni Achievement Award in 2002.

Woods attributes much of his success to his time at WSU – campus life, the friendships he developed, his involvement in campus politics, and the education he received.

One professor, in particular, made a difference for Woods.

“I had my share of difficulty with grades, and he would take the time to talk me through what I didn’t understand. I was so appreciative of the time he spent with me. He was a true mentor.”

Woods also appreciated the hands-on nature of his education. “There was a lot of fieldwork; it was very practical and down-to-earth,” he said. “You learn things that you don’t learn from just being in class.”

Woods said he never considered going anywhere other than WSU for college. His father attended from 1925 to 1929; his sons also are WSU alumni.

“Being a Coug is very strong, very real and permeates through families,” said Woods. “My sons feel the same way about WSU that I do; so did my father. It’s a very personal thing…we’re so loyal because our education has done so much for our lives and our careers.”