Walk into any Starbucks store in Seattle and chances are it may have been designed by Anna Robbins, a 2006 Washington State University Interior Design alumna.

Her most recent design project was transforming an old kitchen on the 8th floor of the Starbucks headquarters into a coffee shop to celebrate the company’s 40th anniversary—a project they started last October and finished in early March.

“When I first started with Starbucks it was very much cookie cutter production,” she said. “Since then, we totally revamped the entire model and now every store has a flavor of local relevance and compliments the surrounding architecture.”

Robbins has been working with Starbucks for almost five years as senior production designer on the Pacific Northwest store design team. She said a major focus of her work is making Starbucks stores community-oriented and sustainable.

“Starbucks is designing, building and operating our stores in ways that reduces our impact on the planet,” she said. “For instance, the new Starbucks store here at our corporate headquarters incorporates everything from responsible building materials and furnishings to energy- and water-efficient fixtures.” 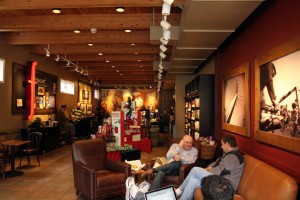 To achieve LEED certification, Robbins incorporates elements into her design like high-blast nozzles to save water, cabinetry made from 90 percent post-industrial material when available, recycled flooring tiles, and paints with low amounts of volatile organic chemicals. LEED certification is the “nationally accepted benchmark for the design, construction, and operation of high performance green buildings,” according to the U.S. Green Building Council. 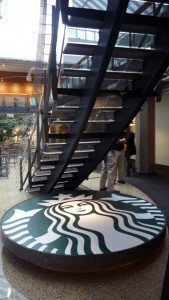 To infuse a Pacific Northwest feel into her designs, she researches what each store needs to fit into its particular community. Design elements such as photos of historical Union Station in Seattle or communal bulletin boards where the public can post flyers and information make a store unique and specific to its location.

“It takes more research nowadays. Before it was more production based,” she said. “Now I think we are treating it as a snowflake approach.”

While many interior designers spend two or three years on a project, new tasks are constantly lining up for Robbins. She and her design manager will design about five new stores and renovate about 30 existing stores this year, including recently established beer and wine locations.

Robbins said it was the interdisciplinary design studio her senior year that prepared her most to work with Starbucks.

“I think WSU really prepared me for innovation and thinking outside the box,” she said.

Spending countless hours working in the studio, she also enjoyed the opportunity to escape with her fellow classmates and professors to visit design firms in San Francisco, Phoenix and Los Angeles.

“To get out into that design environment and see that real life was one of my most fond memories at WSU,” Robbins said.