For more than 60 years, Thomas and Catherine Hyslop devoted much of their spare time supporting Washington State University and rooting for Cougar victories. These dedicated alums received an Alumni Achievement Award together in 1990 for years of support and service to WSU.

On October 20, 2007, Catherine joined other distinguished alumni for the dedication of the College of Agriculture, Human, and Natural Resource Sciences Alumni Hall of Honored Alumni and Friends. 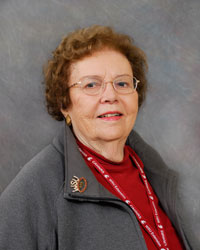 The Hyslops attended WSU from 1934-1938. Thomas received a degree in agriculture and made a career in farming. He passed away in December 2002.

Although she did not graduate, Catherine studied home economics to learn how to cook and went on to make her living as a homemaker.

Catherine decided to attend WSU after graduating top of her high school class. Her academic achievement qualified her for a scholarship and allowed her to live rent-free in the dorms, she said.

“For Thomas, he had a long family history of Cougars,” Catherine said. “His parents, uncle and others all went to WSU. It was the only place he considered.”

Catherine did not anticipate the amount of chemistry required for home economics majors. “Chemistry was very challenging,” she said. “It was new to me because I had not taken anything like it in high school.”

After settling in nearby Spokane, Wash. the Hyslop’s rarely missed a Cougar football game and have been season ticket holders since 1948.

Thomas Hyslop served as a WSU Regent from 1982-1984 and assisted with the hiring of former university president Sam Smith.

One of Catherine’s fondest memories of WSU was formed when she was still a child. “I think being here when Gov. Hartley introduced the new mascot was exciting as a youngster,” Catherine said, referring to the 1927 introduction of a live cougar mascot by the former Washington state governor.

Thomas’ professional life often involved WSU. He worked closely with the agriculture department and was “always on the cutting edge of farming practices,” according to the nomination form submitted on behalf of the Hyslop’s.

Through his professional career and participation in civic activities, Thomas received numerous honors and awards. He was the Spokane Country Cattleman of the Year in 1953 and was honored twice for his superior conservation techniques in Spokane County, once in 1950 and again in 1981.

With 19 other Cougs in the family, the significance behind crimson and grey runs deep in the Hyslop family heritage. Along with years of loyalty and service to WSU, Catherine Hyslop said that being a Coug is simply, “part of my life, it always has been and I imagine, it always will be.”