Todd Lupkes’ return to the Palouse began soon after receiving word of a job opening late one Friday night, with a Monday closing date. Six days, six hundred miles, and one unfortunate deer later, Lupkes’ wife knew it. “We’re moving to Pullman, aren’t we?” she intuited as he walked in the door of his Gig Harbor, Wash. home. 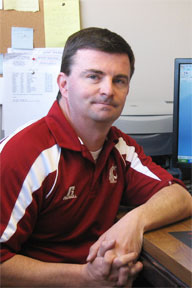 Days later, Lupkes, a ’92 graduate of the turf program at WSU, was hired as superintendent of the Palouse Ridge Golf Club, by CourseCo, the golf course management company contracted by WSU. WSU’s premier Scottish-links style golf course is scheduled to open August, 2008.

“Ten months later I still have goose bumps. I can’t even describe it – everything happened so fast,” said Lupkes. “I am so thankful to have simply been given this opportunity to prove and show I have the skills,” said Lupkes.

According to Lupkes, experience by doing is the key to his success. At the age of 10, his family managed a nine-hole public golf course in Centralia, WA, which they operated while living in the club house.

“The funny thing is, after living, working and breathing golf for 10 years, I decided I didn’t want to do it ever again!” said Lupkes. He entered college to pursue an interest in oceanography, but two years later his thoughts returned to the links. A meeting with Dr. Bill Johnston, long-time WSU turf professor, convinced him to transfer to WSU.

Speaking passionately of the construction process at the Palouse Ridge Golf Club during a recent seminar in the Department of Crop and Soil Sciences, the magnitude of his responsibility to “maintain the entire course” was revealed. Having huge respect for course architect John Harbottle III, whose success also hinges on the final product, Lupkes works tirelessly to make the course a showcase for the University.

He also pledges to make the WSU turfgrass management program the best it can be by mentoring and inspiring the many promising students, and providing valuable learning opportunities at the golf course.

“The irony is that many of the people I work with now were also here back then,” Lupkes said while reflecting on his WSU education. “Now it’s a different relationship. I’m working with them, instead of passing them in the hall, and that’s really neat. After what has happened in the last 10 months, I can’t imagine where I’d go from here that’s up, but I’d love to find out. Maybe a director of golf someday.”

In the meantime, this avid Coug and his wife Dawn bought a home in Pullman. With their two children, Julia 8, and Elsie 6, the family holds season football and basketball tickets.

“I had to buy a five-bedroom home so our friends and family have a place to stay for the games,” he laughed.