When Tom Tidwell attended Washington State University in the mid-1970s, he took as many classes in as many different areas as he could and still graduate on time. He supplemented his already full schedule of natural resource classes in botany, soils, ecology, forestry and wildlife with basic science courses in chemistry, biology and math.

“The education I received at WSU helped me to learn my subject, but also gave me the ability to think,” he says.

It paid off. With a bachelor’s degree in forest and range management from WSU, he has spent the past 32 years with the U.S. Department of Agriculture Forest Service in a number of positions. In June 2009, Tidwell became the 17th chief of the organization. He is charged with balancing myriad needs and interests in the vast natural resources of a nation. He oversees a budget of $5.5 billion and employs 34,350 employees in the management of 193 million acres of forest and rangeland. 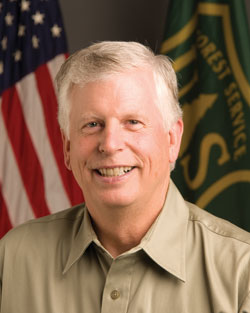 “I encourage people to not only get as much as they can from their opportunity at school, but understand that what they’re learning goes way beyond what they remember for the test,” said Tidwell, a 2011 recipient of the WSU Alumni Achievement Award. “One of the most important things I learned was how to deal with complex issues, which is what I do for living now. How do we continue to find the right balance of uses? How can our communities and public use the land and still realize the benefits they want that land to produce?”

A Washington native, Tidwell was born in Yakima, but spent most of his childhood in Boise, Idaho. “We had access to the outdoors, and that was where we found our entertainment,” he said. “If we weren’t on some sports field, we were out in the mountains, the hills around town, doing a lot of hunting and fishing and spending a lot of time outdoors.”

He remembers that family vacations centered on the outdoors. “My family’s summer vacation was to go camping. We had five boys in the family. We’d stay pretty close to home – just grab the tent or borrow a cabin from someone. Even then, there was this strong connect between where I spent enjoyable times and our national forests.”

That love of the outdoors helped to guide his final decisions about going to college.

“My father strongly encouraged me to pursue a law degree,” Tidwell said, “But that wasn’t what I was really interested in. I knew that I wanted to pursue an education that dealt with natural resources and have a job where I got to work outdoors.”

By the time it was time to apply for college, the family had moved back to Washington. Tidwell looked at the WSU program in natural resources, the advantages of studying wildlife at a college with a vet school and WSU’s proximity to another fine natural resource program at the University of Idaho.

He became a Coug.

“There were several professors that I was very, very impressed with,” Tidwell said. Dr. Rexford Daubenmire, for example, was a plant ecologist widely recognized as one of the leading scholars in the field of plant ecology at the time and one of the first to understand the importance of ecosystems.

“I always felt fortunate that I was able to attend some of the last classes he taught,” Tidwell said. “He is very well known and the principles that he taught and wrote about are still sound today. It was more than 10 years ago that we started shifting our focus toward restoring ecosystems, and that was the focus of a lot of those early discussion I can remember having with Dr. Daubenmire.”

Tidwell did his first hands-on field research at WSU’s ranch outside of Wenatchee, collecting data for research on elk habitat and the forage that elk preferred. “We had to get up early each morning and watch the elk, watch what they ate,” he said. “Then we’d collect the elk pellets they left behind to determine what plant species they preferred at different times of the year with different types of timber treatment.”

That variety of coursework and experience helped tremendously when it came time to apply for a job in his field, Tidwell said. When he took the civil service roster exam, he qualified as a wildlife biologist, a rangeland conservationist and as a forester, “and got real close to being there with the soil scientists as well.” His first job with the Forest Service was as a fire fighter, and he had a variety of different temporary jobs before landing his first permanent job with the Forest Service, which was in rangeland conservation on the Humboldt National Forest in Nevada.

It was the first step in a long, successful journey. Throughout his career Tidwell has been credited with increasing his region’s effectiveness, supporting the conservation of wild lands and roadless areas, and building consensus. He is known as a problem solver who encourages and supports community based collaboration to restore forest health and provide for communities, and maintaining the recreation opportunities that 171 million people enjoy every year.