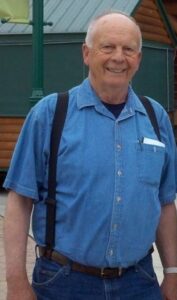 Bob served in the U.S. Navy from 1950-1955.  He earned bachelor’s and master’s degrees in wildlife biology from Washington State University.  He spent his professional career with the U.S. Forest Service.  He started his career as a wildlife biologist in 1960.  He served in that position for three years before serving as an assistant district ranger on the Umatilla National Forest from 1963-1966.  He served as district ranger on the Wenatchee National Forest from 1966-1967.  Bob moved to Portland, Oregon, where he worked for the Pacific Northwest Region as a range management and wildlife specialist from 1967-1969, and  then as regional wildlife biologist from 1969-1975.  He was promoted to regional range management branch chief in 1970 and stayed in that position until 1975.  From 1975-1980, Bob was the Regional Director for Wildlife and Fisheries for the Pacific Southwest Region.  In 1985, Bob was promoted to National Director for Fisheries and Wildlife in Washington DC and worked there until his retirement in 1997.

Bob had exceptional leadership skills.  He recruited wildlife and fisheries biologists and research scientists throughout his career.  Bob prioritized mentoring and personally cared about his mentees.  So many biologists owe their careers to Bob.  Many of his mentees became nationally-known for their outstanding leadership, accomplishments, and professionalism.  He championed national partnerships with conservation organizations across the U.S.  These led to innovative national programs and initiatives that enhanced fish and wildlife habitats across the U.S.

Bob was honored with numerous prestigious awards.  The International Association of Fish and Wildlife Agencies awarded Bob with the “Ernest Thompson Seton Ward”.   He was awarded the national Gulf Conservation award in 1982.  He was the first recipient of the Forest Service “Lloyd W. Swift  Award in the year 2000 for a ‘Lifetime of Leadership Commitment and Dedication to the wildlife and fisheries resources of the United States”.   The Wildlife Society honored Bob with the prestigious Aldo Leopold Award in 1996.  This is the Nation’s highest professional Wildlife award.

Bob was widely-known for his belief that “There is no limit to what can be accomplished if you don’t worry about who gets the credit”  He not only changed Forest Service wildlife and fish habitat across National Forests and National Grasslands, he changed the Forest Service.

I make this donation to honor Bob Nelson, my career mentor.  I would not have had my Forest Service career without Bob.  I offer to mentor Washington State University students in recognition of all that Bob gave to me.   I graduated with two degrees in Wildlife Biology.   I began my Forest Service career in 1967 and worked in variety of positions in New Mexico, Oregon, California, Colorado, Alaska, and Washington D.C.   I served one year on the personal staff of a US Senator.   In my last Forest Service position, I worked internationally establishing conservation partnerships.  After I retired, I taught nature education in inner-city schools in Chicago and Houston.  I now volunteer at Colorado State University and for conservation organizations.

I was the National Endangered Species Program Manager under Bob Nelson.  I later became a Forest Supervisor.  I would like to be here for any students whom would like to reach out.  I was a women early in the years before it was common to have women in leadership positions.

How To Apply
Roughly $700,000 in total awards to hundreds of students annually
Support a Scholarship
Making a difference in the future, one student at a time.