The western United States has one of the most diverse cellulosic feedstocks in the country. An important impediment to a successful ethanol biorefinery is the availability of the technologies that will allow use of those feedstocks. WSU’s Bioprocessing and Bioproducts Group (BBG) is the leading research program in the state focused on advancing the science and technologies for converting biomass into bioproducts and bioenergy. Using a systems approach, BBG scientist Shulin Chen conducts research in the areas of anaerobic digestion, cellulosic ethanol, biochemicals, and nutraceuticals. The group consists of 13 research scientists and eight doctoral students working in a variety of world-class laboratories equipped with cutting-edge tools.

Innovation and uniqueness are key to the BBG research program. Their core technical competencies include:

Partnering with biofuel producers, Chen and his BBG are targeting research to develop a distributed cellulosic ethanol system as well as ethanol wastewater and residue treatments through anaerobic digestion using the resulting biogas as an energy source for operating ethanol plants.

Chen is teaming up with another group of WSU researchers and industrial and governmental partners to overcome some of the commercial, scientific, and technological hurdles blocking widespread adoption of anaerobic digestion technology.

Since 2002, Chen’s multidisciplinary research team, housed primarily in the WSU Department of Biological Systems Engineering, has focused on improving anaerobic digestion performance and lowering the costs to digest animal manures and municipal solid wastes. Their strategy is to create a new generation of technologies to digest slurry, high solids content animal manures, and municipal solid wastes at dedicated anaerobic digestion laboratories and the WSU Dairy Center.

Chen’s team is also conducting biological studies to find improved bacteria strains or consortia of strains and ways to produce bacterial granulation and retention for anaerobic digestion; chemical studies on the recovery of high value products from the available nitrogen, phosphorous, and fiber components of manure; and engineering research that combines all of the lessons learned into more efficient, higher-rate reactors to reduce overall processing and capital costs and enhance biogas and value-added product production.

Research moved from the laboratory to the field in 2005 when scientists partnered with the VanderHaak Dairy in Lynden, Wash., to demonstrate and evaluate the first anaerobic digester system employed by a commercial dairy in Washington. The 1,000-cow herd generated 200 kW of electricity, enough to power 100–200 American houses.

The same type of bacteria that help break down paper mill waste could also become a viable source of environmentally friendly biopolymers that can be used to make bioplastics, glues, and composite building materials.

WSU ARC scientist Jinwen Zhang and Professor Mike Wolcott, both faculty members in the Department of Civil and Environmental Engineering, focus on naturally occurring bacteria that produce and store polyhydroxyalkanoates, or PHAs, which are chain-like molecules called polymers found in plastics, glues, wood, plants, and even mussel shells. “Polymers are what bind the fibers together in wood or plants or plastics,” Wolcott explained. “Until now, the plastics we’ve been using have been petroleum-based. We could reduce our dependence on international oil if we could make the way we produce PHAs more cost-effective and find new uses for a less pure version of them.”

Firms in the U.S., China, and Brazil have commercially produced PHAs using fermentation techniques for many years. But, Wolcott said, the current process is expensive financially and environmentally. Wolcott’s research group is attacking both challenges by exploiting the fact that the same type of bacteria grown commercially for PHAs are used in the water reuse sites of paper mills to convert phosphates into phosphorous.

“The production of PHAs by those bacteria has been fairly low,” Wolcott explained. “One challenge is to find the right environmental conditions at the wastewater treatment site to enhance production… We are trying to get these guys as fat as possible. By regulating the treatment process, we can substantially increase the amount of PHA produced, in addition to reducing the phosphates to a very low level.”

Wolcott also developed composite materials that can utilize a simple centrifuge process for extracting PHA into a crude form. This physical process is much less expensive and less damaging to the environment than the chemical extraction currently used.

Put the heat on

One way to replace dependence on fossil fuels is to replicate the heat and pressure-based process that helped create the world’s petroleum stores in the first place. Manuel Garcia- Pérez, a new professor in WSU’s Department of Biological Systems Engineering, focuses his research on thermochemical transformation of biomass into syngas and pyrolosis oil that can be refined into a variety of petroleum-replacing products, including fuel. Together with Su Ha, a professor of chemical engineering who works on improved catalysts, this team complements Chen and his team’s efforts toward biological conversion for use in integrated biorefineries.

From culls to cows

Chen also is developing a process to convert cull potatoes and potato waste into omega- 3-enhanced milk, potentially establishing milk as an alternative source of omega-3 fatty acids for consumers and offering farmers the opportunity to profit from a value-added product while reducing their losses from an undervalued one.

Using potato starch from the culls, Chen’s process produces algae that researchers can use as a feed additive for dairy cows. Through natural processes, cows can extract the omega-3 fatty acids and excrete it in their milk, resulting in dairy products with increased nutritional characteristics. Additional benefits are eliminating thousands of tons of cull potatoes from the waste stream and increased profits for both potato farmers and dairy producers.

The effect on both the Washington potato and dairy industries could be significant. Washington State grows 165,000 acres of potatoes, with harvesting averages of 30 tons per acre. Ten percent of this total, or three tons per acre, is too small to be used in processed potato products, which until now meant losses of at least $55 per ton. 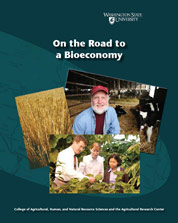