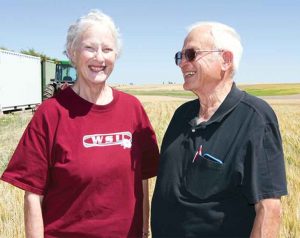 As Carol Quigg and her brother Jerry Sheffels walk the field’s edge at Wilke Farm, Jerry plucks an ear of grain, rolls it in his hand, and then examines it closely—with good reason. Crop discoveries made here will ultimately affect his nearby farm, and could change, for the fourth time in his life, the way he does business.

Both Jerry, a Lincoln County wheat farmer, and Carol, a Spokane Valley resident, 1958 Home Economics alumnus, and former WSU Extension agent, are fearless innovators. Because of that, they’ve both made a big impact here at Wilke Farm and on WSU’s Agricultural Technology & Management undergraduate program, or AgTM.

Last spring, Carol watched in delight as third graders at Pullman’s Sunnyside Elementary were quizzed by student members of the AgTM Club, who taught the youngsters lessons on food, farms, and science over the course of the semester.

“Their arms were shooting up,” she said.

“They saw the full circle, from planting to harvest to food,” said Jim Durfey, AgTM advisor.

Then, the group of more than 100 kids, dubbed “The Little Sprouts,” munched on the fruit of all that knowledge: fresh-made hummus. Carol sponsored it all, challenging WSU students to bridge education and agriculture.

“I’m not an active farmer, but I am very interested in education and agriculture,” she said.

Right out of college, she worked as a WSU Extension agent in Whitman County.

“Working with farm people is a very special thing,” said Carol, who treasured the community spirit and work ethic she encountered. She formed friendships that last to this day.

One of Carol’s biggest life lessons is that learning never stops, and that education has to change with the times.

Jerry and Carol are Esser’s partners, helping support the farm in many ways. Most recently, they funded a new multipurpose building to be named “Roger’s Shed” in honor of Jerry’s late son, a CAHNRS alumnus killed in a plane crash in 2001. The new building will store equipment and provide a meeting place for farm events.

“For me to be successful, it takes people like Jerry and Carol, who are willing to step up and stick their necks out,” Esser said. “Down the road, that benefits everyone.”

“I think they’re visionaries,” he added. “They’re leaving a lasting impression for generations to come.” ♥

For many Cougs, the bond with CAHNRS is part of a family tradition that spans generations.

Meet families whose Cougar heart draws loved ones together, honors past pioneers, and inspires a new class of Cougs.