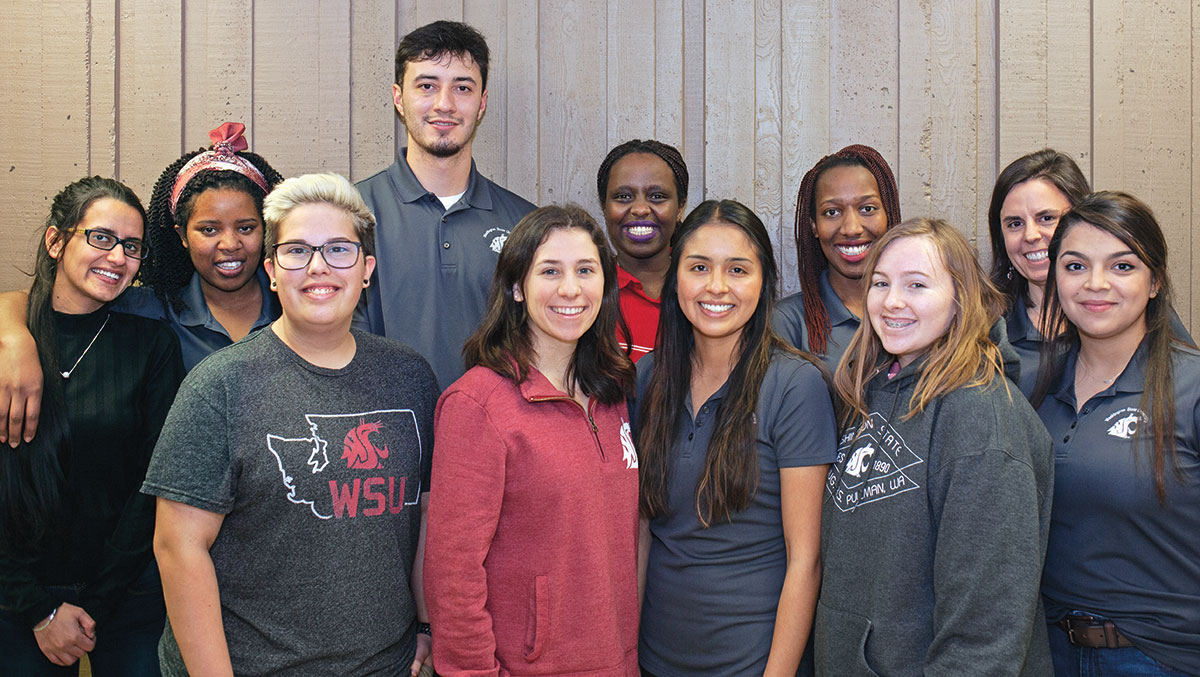 For Letty Trejo, a senior from Bridgeport, Wash., attending college was never a given.

“My earliest memories are of my parents waking up before sunrise to pick fruit,” she says. “Bridgeport is a small town of mostly migrant farm workers, so I’ve grown up with agriculture happening all around me, but I really had no guidance on attending college.”

Af ter a year at Wenatchee Valley College, Trejo transferred to WSU because, “I knew they had great agriculture programs.”

From Guam to Pullman

Tomyia Wallace’s journey to WSU started half way around the world.

“I’m the first in my family to go to college,” Wallace says, “and I’m also the first to join the military.”

Five years of service in the US Navy took Wallace first to Japan and then to Guam. But it was her desire to study agriculture that brought her to Pullman. “My grandmother has a green thumb,” Wallace explains, “and I always wanted to be like her.”

At WSU, Wallace decided on a career that could help prevent illness: growing nutritious food and teaching others how to do the same.

Like Trejo, Wallace felt the challenges of being a minority student studying ag riculture.

“I’m the only black female in any of my ag riculture classes,” she says.

The need for new perspectives

Their shared identity as minority agriculture students led Trejo and Wallace to help start one of WSU’s newest campus organizations: the WSU chap­ter of Minorities in Agriculture, Natural Resources and Related Sciences. Known by the acronym MANRRS, the club is a national organization, with chapters in universities across the country.

“I saw an incredibly valuable resource for Wash­ington state and for WSU students, something that really let them hone leadership skills,” Casavant explains.

In the fall of 2018, the WSU MANRRS chapter held its first official meeting. Trejo was elected president.

The benefits of the club are already apparent. In October, MANRRS members attended a regional conference at Oregon State University. Inspired by what they saw around them, several WSU students, including Wallace, entered the debate competition and won. They’ll be attending the national debate competition this spring.

“MANRRS provides minority students with the opportunity to create relationships and make connections with industry members that will one day hire us,” says Trejo, who has just been offered an internship at Land O’ Lakes. After graduation, she will move to Corinne, Utah, as a Winfield United Technology Manager intern.

“Being able to sit and have breakfast with the president of a company and talk about my career goals, my background, and how I could fit into their company are some of the opportunities MANRRS has offered me that I don’t think I would have oth­erwise,” Trejo says.

But the value of MANRRS isn’t just in what it offers to CAHNRS students.

“If I had to tell someone that they should donate money to help support MANRRS, I would tell them that they’re contributing to the future of agricul­ture,” Trejo said. “They’re helping provide industry with diverse leaders who have new and different perspectives to better our world.”