Travel is one of Bunny Quirk’s great passions.

“My mother and my grandfather always wanted to be some place other than where they were,” she says, recounting her youth on her family’s wheat farm, “and I inherited that trait.”

At well under five feet tall, Bunny, whose given name is Cecelia, has never let her petite size—or anything else— stand in her way.

“I started traveling young,” she says. “I have a great deal of curiosity about the world, and I’ve never been afraid of anything or meeting anybody.”

The stamps on her passport are there to prove it—from the South Pacific to the Swiss Alps, her travels have taken her to the far corners of the world, far beyond the edge of most people’s comfort zones. Her favorite place?

“That’s a toughie,” she says, looking into the distance, searching the catalogues of her memory. When the answer comes, she smiles. “Ethiopia.”

The joy of giving

Born and raised in Lincoln County, Wash., Bunny graduated from WSU with a degree in Home Economics and made a career as a teacher in the Yakima valley. Summer vacations gave her the freedom to read and travel. Retirement has increased her time for both.

These days, Bunny lives in a house that has been in her family for three generations. Filled with heirlooms handed down from her grandmother to her mother and on to her, the house is also a reminder of the legacy she inherited—to work hard and give to others. “I’ve lived a blessed life,” Bunny says, “and it feels good to give back.”

One of the ways Bunny has chosen to honor that legacy of giving is through the creation of a scholarship that supports CAHNRS students. Now in its fourth year, the Cecelia “Bunny” Quirk Agricultural Scholarship funds students studying agricultural education or crop and soil sciences and reflects the importance of connection and stewardship to the land.

“Washington state is special,” Bunny says. “The diverse landscapes, the diverse agriculture. I’ve seen a lot of the world, and Washington is very special.”

Bunny is the first to admit that even she is surprised by the trajectory of her life.

“When I was growing up, Grand Coulee Dam was the largest dam in the world, and when important people were visiting, they were taken there.” One of those important people was Haile Selassie, the emperor of Ethiopia. “He drove right through town,” she says, crediting that memory with sparking her desire to see the world.

But a scholarship in her name started as a small dona­tion. “I think most of us start off giving a little bit, and we enjoy it,” she says. “That’s really why I do it. Giving probably gives me more pleasure than it helps those who receive.”

While she’d rather be in Bermuda than in the spotlight, Bunny knows her gift has the potential to change the lives of the students who receive her scholarship.

“I just want to ease their load,” she says. “I want them to have good careers, good families. And I’m pretty sure they’ll give back what they can one day.”

She also understands that a college education intro­duces students to a bigger world than perhaps many of them have known. “I’m glad I came to WSU,” Bunny says, “rather than a school where everybody was just like me. It’s good to broaden your horizons.”

When asked what wisdom she might share with her scholarship recipients, Bunny has an answer that applies to us all.

“They don’t have to be like me, live the way I do, love the things I love. We’re all individuals, but I’d tell them to just pay it forward,” she says. “Give of your time, your talents, your treasure when you can, even if it’s just a little bit. If all of us gave a little, it would go a long way.” 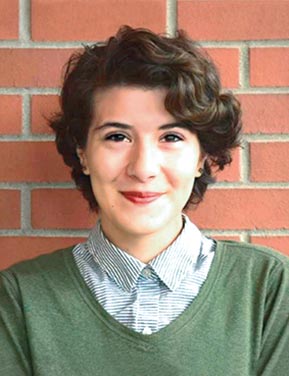 Haile Hunsaker understands the power of education. Hunsa­ker, the 2018–19 recipient of the Cecelia “Bunny” Quirk Scholarship, is pursuing a degree in Agriculture Education, and, much like Bunny Quirk did, she hopes to give back to her community as a high school teacher and mentor for future Washington farmers. A senior from Port Orchard, Wash., Hunsaker is a first-generation college student, who, like many WSU students, needed help funding her education.

“It’s impossible to be successful in college while constantly worrying about the price of supplies and keeping a roof over your head,” says Hunsaker. “Receiving the Bunny Quirk Scholarship has certainly been very helpful for me.”

Helping students like Haile is the reason Bunny decided to establish the scholarship. “It just brings me so much joy to help,” Bunny says.

But for Haile, a President’s Honor Roll student, the scholar­ship hasn’t just allowed her to focus on her studies. It’s taught her what kind of educator and person she wants to be.

“Legacy giving is a way to show support for a cause or plat­form that you really believe in,” says Hunsaker. “Bunny Quirk believed strongly in the ideals of agriculture and giving back to the community. I’ll be sure to carry on the spirit of her commitment to agriculture through my role in educating the next generation of students!”