Not a stone or beam remains of James S. Davis’ hotel on the summit of Steptoe Butte. The rolling prairies far below have long since given way to checkerboards of ripening grain. 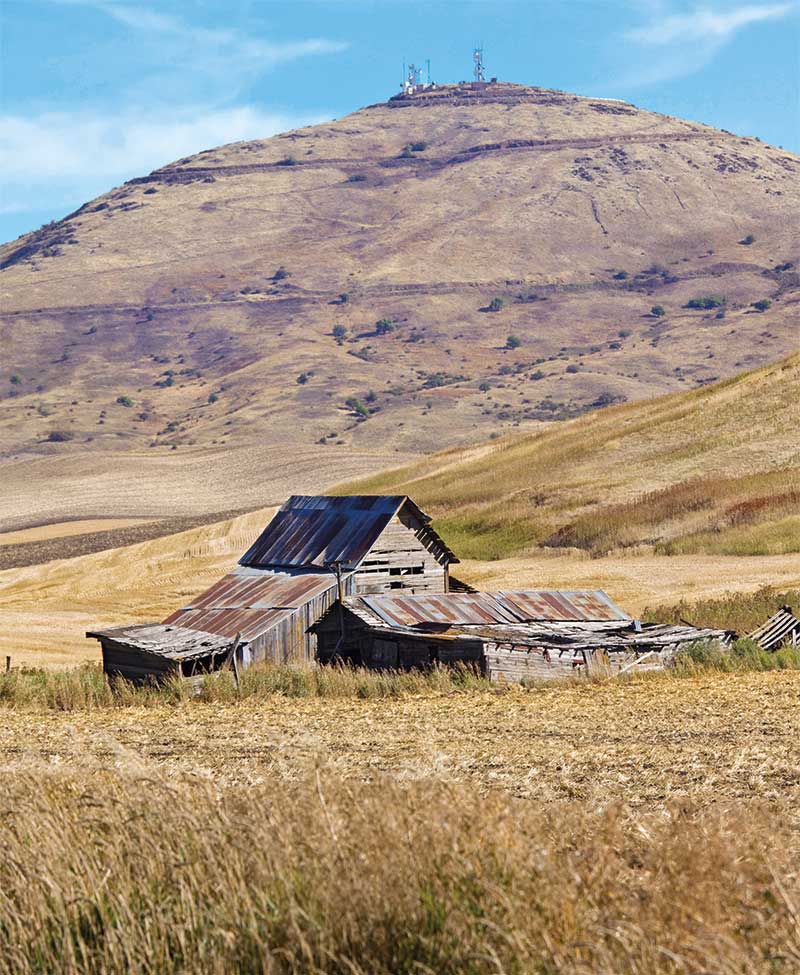 The vista from Steptoe Butte, a quartzite island rising 1,700 feet above the Palouse, is as inspiring today as it was 128 years ago, when Davis, an immigrant and entrepreneur better known by his nickname of “Cashup,” opened the grand inn.

“It takes my breath away,” said Gordon Davis, Cash­up’s descendant and a CAHNRS alumnus who led a dozen family members to the top of the mountain two summers ago. “Every time I come up to Steptoe, it opens my mind to what my great-grandfather saw when he first came here in 1872.

“He could look for many miles on every side and pic­ture the richest farmland in the world,” Gordon added. “If he could stand here today, I don’t think he’d be one bit surprised by what he would see.”

As a sod-busting homesteader at St. John in 1872, then as an innkeeper and hotel-builder, James Davis could see the potential of this land for agriculture, trade and improvement. His early vision predicted the Inland Empire of today.

Gordon, who graduated from Washington State Uni­versity in 1969 with a double degree in agricultural science and agricultural education, inherited much of the Cashup spirit. An award-winning teacher, mentor, entrepreneur and philanthropist, Gordon helps students and educators at WSU, in his home state of Texas, and nationwide rise to excellence.

In the classroom, the boardroom, and in the frigid walk-in coolers where he coached his intercollegiate meats judging teams, Gordon has always followed the same motto: “It’s all about the kids.”

His journey began in 1964, when his family was named the Washington State Dairy Family of the Year. Gordon remembers being “grilled under the willow tree” by Tim­othy Blosser, chairman of the award selection committee and head of the WSU animal sciences department, who recruited him to the university’s competitive livestock and meats judging teams. That experience, a team contest to apply critical thinking and analysis quickly and accurately, changed his life.

After graduation, Gordon taught high school agricul­ture before seizing the chance to get back into collegiate judging, following his former coach and mentor Gary C. Smith to Texas. Building future leaders in the food industry, Gordon was proud to be able to co-coach two national champion teams, in 1973 at Texas A&M, and 1989 at Texas Tech. Former team members tell him the experience changed their lives, too.

In 1990, Gordon founded his educational media company, CEV Multimedia. Now a world-class service used in 67 colleges and universities, and high schools and middle schools across the nation, the service has 15,000 teacher subscribers, including more than half of all agriculture educators nationwide. Gordon, as chair, leads with four partners—three of whom are former members of championship judging teams.

With success, Gordon gave back. A major supporter of education, he served on CAHNRS’ National Board of Advisors and its Campaign Council, helping raise more than 250 million to support academics, research, and Extension. Gordon continues to financially support CAHNRS student learning today.

“No matter how good you are, you can always get better,” he says. “The team is always more important than any individual win. I’m on the Cougar team, and we’re winning together.”

As a teen, Gordon learned from family elders about Cashup, his famous ancestor.

“My great-grandfather, a man I’ve never met, has been a secret mentor to me,” Gordon said. “He had incredible vision. I’ve had success in life because of that same vision. I’ve tried to see ahead of the game, just like him.”

In his latest trip to the Palouse, Gordon made sure to pass on the Davis history to the five youngest members of his family—Cashup’s great-great-grand­children.

“It is quite a story,” he told the children. “You need to learn about it.”

This spring, Gordon’s oldest grandson, Reese, came to WSU as a transfer student.

“I think Cashup had something to do with it,” Gordon said.