Bouncing up a one-lane dirt track in the mountains of China’s remote Yunnan province for nearly 14 hours in a government vehicle, Orlin Reinbold was a long way from home.

For three generations, his family’s business, Landmark Turf & Native Seed, has helped farmers save their land from erosion and protect the environment.

Orlin’s grass seed adorns the Mile High Stadium, where the Denver Broncos play. It covers major league ballfields, and the fairways and greens of the U.S. Open and the LPGA.

Success, though, “that doesn’t make me who I am,” says Orlin. “Most of life is about associations, meeting people, understanding a culture—those are the real experiences.”

So when he was directed to inspect grass seed farms in far-flung corners of China, the Spokane resident jumped at the chance. That meant long rides, late flights, and encounters with strangers, few of whom spoke English.

Taking stock at the end of a particularly exhausting drive, he paused for reflection. “What am I really doing here?” Orlin thought. Adventures like these, he decided, lead to deeper understanding.

And Orlin believes that deeper understanding leads to world-changing advances. For his global pursuit of knowledge, commitment to continuing his family legacy, and desire to help young people expand their horizons, Orlin embodies the heart of a Coug.

Family traditions at WSU run deep. From his grandparents straight on down to his daughter, Orlin’s family is full of Cougs. There’s every chance that a fifth generation, Orlin’s grandchildren, will also be Cougars.

But the WSU legacy isn’t the only one this family keeps—they’re also innovators.

It was Orlin’s paternal grandfather, August, who was one of the first to plant winter wheat near Davenport. And it was August’s ideas about conservation that spurred a visit to the family cemetery—one of the few places where native grass still grew—to compare the topsoil there to the topsoil in his own fields.

“He surmised that the fourth generation would never farm his fields because there wouldn’t be any topsoil left,” Orlin said.

At the new WSU Plant Growth Facility, Orlin got a hands-on look at experiments run by students of Michael Neff, head of WSU turfgrass research.

“I wouldn’t be doing any of this without Orlin,” says Neff. “Thanks to him, my students are getting real work experience. Along with financial support, Orlin gives me a lot of intellectual support and insight. He’s shown me the challenges that his industry faces. It’s a total collaboration.”

With Orlin’s help, WSU could become the leading center for drought-tolerant grasses that need little fertilizer or chemicals. Living lawns could protect our water resources.

“Let’s be the university that does that!” he said. ♥

For many Cougs, the bond with CAHNRS is part of a family tradition that spans generations.

Meet families whose Cougar heart draws loved ones together, honors past pioneers, and inspires a new class of Cougs. 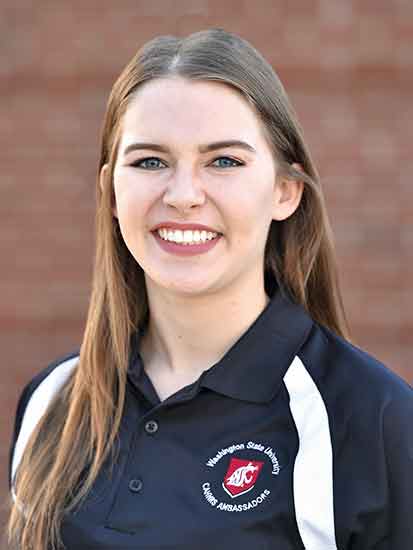 Digging into the secrets of plant genetics, Holly Lane, a senior in agricultural biotechnology, sees herself as a problem solver.

“Taking a step back fills in the bigger picture,” said Lane, who is gaining real, fundamental research experience thanks to funding from Orlin Reinbold. “If you know how something works, you can make it better.”

Lane is part of Dr. Michael Neff’s ‘Big Seed’ project, which looks at how plants make longer seedlings that can be planted deeper, helping them thrive.

“As a student, it’s great to see that somebody in the industry thinks that what you’re doing is important,” she said. “You see that your dreams are valid.” ♥