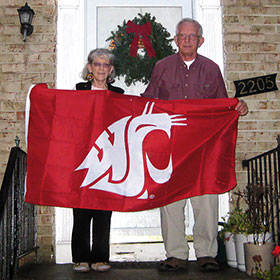 George Fries (’54, Dairy Sci.) has retired after 40 years as a research animal scientist with the USDA Agricultural Research Service. A native of Winlock, Washington, George and his wife, Jean, currently live in Silver Spring, Maryland. They celebrated their 50th wedding anniversary last year. George currently serves as the volunteer business manager of the townhome condominium where the couple lives.

Colleen Nolan (’82, Animal Sci.) is dean of the School of Natural Sciences and Mathematics at Shepherd University. She recently was named an ACE Fellow for academic year 2012–13 by the American Council on Education.

Stacy Taylor (’83, Econ.) is the branch manager of the Tri-Counties Bank in Truckee, California.

KayDee Catlin Gilkey (’90, Ag. Sci. with a communication emphasis) recently began a new career as an agriculture radio broadcaster with the Ag Information Network. She currently lives in Fairfield, Washington.

Jeff Niesz (’90, Ag. Econ.) is on the domestic sales team for Columbia Marketing International, one of Washington State’s shippers of apples, pears, and cherries. He has 16 years of experience selling produce in the Northwest.

Meiyin Wu (’95, MS Env. Sci., ’99 PhD Env. & Nat. Resc. Sci.) is director of Montclair State University’s Passaic River Institute for Environmental Research and Education in New Jersey. Prior to taking the position, she was an associate professor of biology and microbiology at the school.

Faisal Awawdeh (’97, PhD Animal Sci.) is the new coordinator of the Arabian Peninsula Regional Program for the International Center for Agriculture in the Dry Areas.

Heath Barnes (’00, Ag.) is a grain merchandiser for Columbia County Grain Growers. He and his wife Tisha are living in Clarkston with their five children.

Ryan Kile (’04, Agribus.) is a relationship manager for Northwest Farm Credit Services in Colfax. He recently received a Special Recognition Award from the Spokane Guilds’ School for serving as chairman of its annual benefit auction. He currently serves on the school’s board of directors, as well as the board of directors for the Spokane Ag Expo and the St. John Golf and Country Club. He and his wife are expecting their first baby in April.

Allyson Beall (’07, PhD Env. & Nat. Res. Sci.) spoke at the World Water Forum in Marseille, France. She is an instructor in WSU’s School of the Environment.

Rachel Lewis (’08, Ag. Econ.) was recently appointed by the Quincy City Council as the new manager for the Quincy animal shelter.

Donna Drader (’09, MS Nat. Res. Sci.) helped start a school in Uganda. On a recent visit, she was honored by the school naming one of the buildings after her.