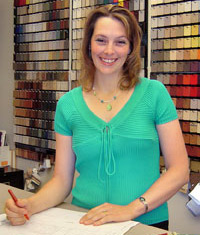 Nicole Cecil (’96, Interior Design) won the 2013 Commercial Design Award from the American Society of Interior Designers (ASID), Intermountain Chapter, for her work on the corporate headquarters of Glanbia Foods in Twin Falls, Idaho. In addition to interior design, she is also a project manager at CSHQA, an architectural firm in Boise, Idaho. She remembers her time at the Interdisciplinary Design Institute in WSU Spokane as the most valuable part of her student experience. Find out more about what Nicole has been doing since graduation in her CAHNRS alumni profile.

Steve Bell (’96, Nat. Res. Mgmt.; ’01, MS Nat. Res.) married Erik Higgins on September 1, 2013. The couple lives in Chehalis. In addition to his two degrees from WSU, Steve earned a master of public administration in 2011 from Evergreen State College. He now works for the Washington Department of Fish and Wildlife as a fish and wildlife biologist.

Hazen Palmer (’08, Ag. Tech. & Mgmt.) joined the staff at Crop Production Services in Pasco in 2013. As a crop consultant, he helps potato, corn, onion, bean, and pea growers increase the efficiency and profitability of their operations. Hazen has three children with wife, Angie: Ashlynn, 5; Michael, 13; and Alex, 11. Hazen describes himself as a near-lifetime Coug because most of his family is also WSU alumni. He has great memories of his three years in Pullman, including time at Martin Stadium on Cougar Football Saturdays, the CUB, and the library. He values the class experience, good working habits, and ability to be innovative that he gained from WSU. 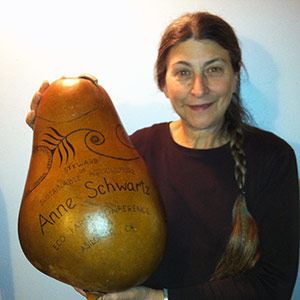 Anne Schwartz (’78, Animal Sci.) of Blue Heron Farm near Rockport was honored with the 2014 Steward of Sustainable Agriculture Award at the 34th Annual EcoFarm Conference in Pacific Grove, California, in January. The lifetime achievement award was presented to Anne for her commitment to sustainable agriculture and family farmers. For more than 35 years, Anne has advocated for sustainable agriculture research and teaching programs at WSU, state and national organic standards and sustainable agriculture policy, and efforts to bring educational opportunities for adults and teens to her farm. Anne was honored by CAHNRS in 2003 with the Women’s History Award for Leadership and Public Service in the Pacific Northwest, and in 2009 she was inducted into the CAHNRS Hall of Honored Alumni. She currently serves as co-vice president of Tilth Producers of Washington and in several advisory roles for CAHNRS. 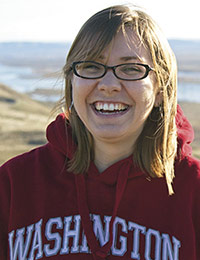 Tiffany Britton (’11, Hort.) joined the crew at Claar Cellars in the Columbia Valley in 2013. She is working as an enologist and loves her new career. She tells us “it’s not all glamour when you are knee-deep in wine dung, but when you are pouring at an event you feel like a superstar because you helped create the product.” You can keep up with her professional adventures at A Walk on the Wine Side.