WSU has its own Dr. Ruth — Dr. Ruth Norman. And the famous sex therapist has nothing on WSU’s Ruth Norman in terms of positive impact.

Norman graduated with two degrees from WSU. In 1950, she earned her BA in home economics, and two years later another in education. Her application of what she learned at WSU to address issues of global importance earned her a spot on the CAHNRS Hall of Honored Alumni and Friends. 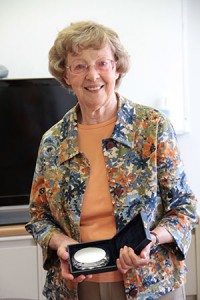 In 1977, Norman was appointed as the International Federation of Home Economics’ (IFHE) representative to the United Nations and their children’s fund, UNICEF. In this role she served on a team that earned IFHE consultative status within the UN, meaning that the Federation could bring its expertise to bear on issues concerning women, children, food, aging, and population.

During her 25-year tenure in New York, Norman served as director of the BHRAGS Homemaker Home Health Aide Training Program, primarily for low-income minority women. As a member of New York’s Riverside Church, Norman did charitable work that generated $40,000 a year. She also helped found The Elder Craftsmen, a shop that sold crafts made only by retired people. A related project involved conducting one of the first studies that assessed the role and influence of grandmothers on children. To encourage idea exchange and learning about other people’s stories and experiences, she founded the 1066 Club, named after the year of the Norman Conquest.

“I wanted to see the world,” Norman said, “so whenever there was a call for a volunteer or a need for someone to step up to the plate in order to get something done, I raised my hand.” Norman organized and attended meetings, and delivered numerous talks at conferences, which took her, among other places, to the Philippines, Thailand, South Africa, England, France, Norway, Canada, and Jamaica.

Norman’s advice to current students is “Take advantage of every opportunity.” Living now in her native Bellingham, the thrice-decorated WSU alumna—she received the WSU Home Economics Distinguished Alumni Award in 1985 and the WSU Alumni Achievement Award in 1986—said she is retired in name only. “I’ve got to have something to do all the time. I’m currently learning Spanish.”