1982: in a suburban garage in West Richland, hobby winemakers Jim Holmes and John Williams stand behind folding tables pouring samples of their recent vintages. Despite the exceptional quality of their product, it’s been difficult moving their wine into the regional supply chain, making wine tastings in this no-frills location a common occurrence. This scene provides new perspective on the high-tech garage start-ups of the 80s and 90s, but 30 years later, the outcome of Holmes’ and Williams’ venture is just as impressive as that of Apple or Amazon.

Jim Holmes, the retired owner of Ciel du Cheval Vineyards, is a legend in the Washington wine industry as the first to plant grapes on Red Mountain in the Yakima Valley. Today, the region is covered with vineyards making the most of the high pH soil and low-rainfall climate that stimulate vines into producing highly coveted winegrapes. But in the 1970s nobody, including Holmes, knew that you could have a successful vineyard operation in the region. 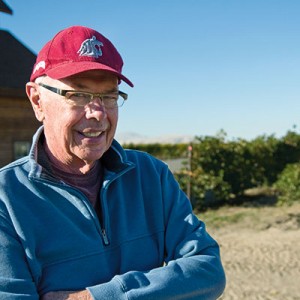 Holmes entered the wine industry in 1972 in what he describes as a “serendipitous” move. Looking at his success, however, it’s clear that timing, persistence, and learning—both on the job and from others versed in the science of growing grapes—outweighed mere good fortune. “John and I had just made an unsuccessful run at the stock market,” recounts Holmes. “With some money still on hand, my friend and I thought that it would be good to invest in real estate. Richland and Yakima were growing rapidly, and we figured that the land between them would be worth something, so we bought 80 acres from the father of a friend.” That land was purchased for close to $16,000 in an area that now sells for $40,000 per acre.

“We had no idea what to do with the land, until we came across a report by Doctor Walter Clore from [WSU].” That report made a strong case for the region being ideally suited for growing grapes.

While Holmes had toured Europe and enjoyed many local and foreign wines, he knew nothing about growing winegrapes. Nevertheless, he and his partner decided to give it a go. Holmes didn’t quit his day job, but he spent nearly all of his spare time tending his vineyard. “We had to learn about irrigation, pruning, and everything else that it takes to grow grapes,” he said. “We had to dig a well, and we consulted with others on how to plant.” Their first harvest revealed how little they knew. “Early on, I thought that we could transport our grapes in a pickup and sell them to home winemakers in Seattle. I didn’t realize how much 10 acres of grapes would weigh.” The weight of that harvest—close to 80,000 pounds—forced them to rethink their approach.

In the early days, Holmes struck a deal with a regional winemaker to purchase their crop, but because there was little brand value for Washington grapes, the sale price was low. “We knew that our grapes were worth more than what we were being offered, so we started making our own wine.” The move towards vertical integration meant that Holmes also became the lead salesman for the operation. Holmes worked with a small Seattle startup wine distributor to get things going in the city as well as in the local market.

Successful local distribution reinforced what Holmes knew all along: he had an exceptional product and it wouldn’t be long before others realized the potential of the area and competition rolled in. Holmes and Williams were hauling their product to Seattle, selling directly to restaurants and businesses that were interested in local wines. Demand was on the rise and they recognized the need to acquire more land, develop partnerships with the wineries that now coveted their grapes, and shift from a hobby to full-time work. At that point, Holmes and Williams amicably split and Holmes began to focus on growing “new and adventurous varieties.” He has since settled on three broad types of grapes— Bordeaux, Rhone, and Italian—that he believes are ideal for the region.

After more than four decades as a leader in Washington’s wine industry, Holmes’ recipe for success was simple. “Every time we encountered a roadblock, we just did what seemed to be the sensible thing to do.” That sensibility is based on more than intuition, and Holmes credits WSU for contributions to the industry, including Clore’s groundbreaking report.

While Holmes frequently refers to the “art” of grape growing, he recognizes the science that informed his techniques and decisions. “Research at [WSU] showed that we were over-watering and not stressing the vines. Growers now irrigate with much less water, which preserves this natural resource.” Holmes also praises WSU for another major contribution that not only saved his grapes, but the health of his employees: “Cutworms were climbing up and attacking the buds on our vines.” Growers would spray their entire plants with pesticide. “WSU research determined that if we just sprayed the base of the vines, the larvae wouldn’t climb [past that].”

Holmes has become an ardent supporter of WSU and its research in viticulture and enology. His support, and the support of others like him, are making WSU projects like the WSU Wine Science Center possible. And Washington wine, Holmes’ wine, is no longer being tasted and peddled solely in a local garage—it’s gained international recognition, thanks to both science and sensibility.