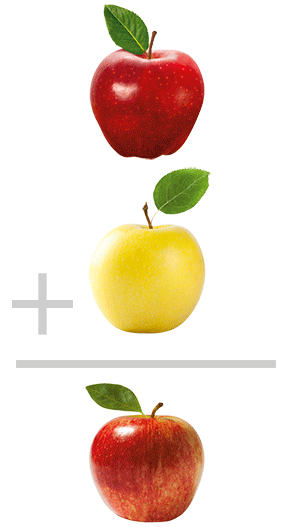 Never before has such a vast amount of
genetic information been available to tree
fruit breeders. Today, Washington State
University researchers know enough about
the natural diversity within a species’ genetic
code to enrich centuries-old tree fruit
breeding techniques. Here in the Northwest,
this means increasing tree fruit yields while
leaving a smaller environmental footprint.
For consumers, it means better tasting
apples, cherries, peaches, and other tree fruit. 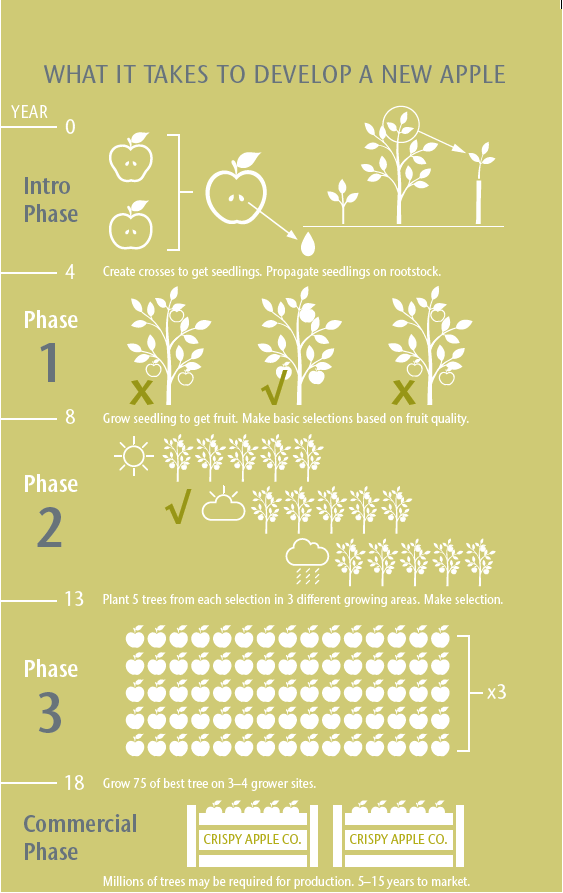 At the heart of these improvements is genomics, the study and mapping of genetic material, or DNA. In 2010, WSU scientists unraveled the genetic code of apples and in 2013 the code of pears and cherries, in hopes of one day breeding better fruit. With this genomic wealth, “we can make more efficient decisions about which plant parents to combine to get the traits we’re after,” said WSU apple breeder Kate Evans. It greatly increases the odds that the desired traits will show up in the offspring seedlings, she said.

Cameron Peace, a WSU tree fruit geneticist, identifies genetic markers and develops DNA tests that enable breeders like Evans to develop fruit varieties that better reflect consumer preferences. For the WSU apple and sweet cherry breeding programs he develops tests to predict traits of fruit quality like sweetness, crispness, size, and color, as well as traits associated with productivity such as disease resistance and self-fertilization.

The holy grail of the apple eating experience is a perfect balance of tartness and sweetness. But crispness is also vital.

“Honeycrisp is the only major apple variety that has an ultra-crispness,” Peace said. “Now we have a genetic tag for that so we can make sure new varieties are crisp plus have other qualities.”

Scientists have also recently discovered areas in the apple genome that allow them to develop DNA tests for sweetness.

“We can make fruit more exciting. We can breed fruit that has higher sweetness so kids are eating fruit instead of candy,” said Peace. “I want everyone to be eating as much fruit as I do!”
Evans relies on marker-assisted breeding to make decisions in two ways. First, she uses it to select which parents to cross to get seedlings with the desired traits. Second, she can analyze seedlings for particular traits through leaf samples, so only those with the traits she’s after move to the next phase of breeding. Since it’s not uncommon for 50 to 90 percent of the seedlings to get tossed, the cost savings from not growing out the inferior seedlings to the point of fruit production is significant. Peace estimates the savings to be around $50,000 a year.

Because the process of developing DNA tests for tree fruit is very complex, Peace relies on collaboration with researchers across the nation. He also relies on information technology.

The vault of information unlocked by genomics is vast and requires sophisticated technology to manage and interpret the data. Dorrie Main, a bioinformaticist at WSU, applies information technology, statistics and mathematics to store, manage, process, analyze, disseminate and visualize DNA data. In other words, she helps researchers and breeders like Evans make sense of the immense amount of genetic data now available.

Main and her team created an online tool called CrossAssist to help breeders make decisions about which varieties to cross.

“If a breeder knows what attributes they want in their apple offspring—like a certain level of sweetness—the tool will suggest the best parents to cross,” Main said.

With 20 years of data to aid in the decision making, this would be nearly impossible without such tools.

So Much Time, So Many Trees

Developing new varieties of tree fruit is not for the impatient. The original cross that resulted in the now popular Honeycrisp apple was made in 1960 at the University of Minnesota. It was patented in 1988 and released for commercial production in 1991. Twenty three years later, the variety has become quite popular.

It may take 15 to 30 years to get from the original parent cross to the commercial release of a new variety but the process doesn’t simply end with an appealing apple.

Once a market has been created, the next challenge is supplying enough trees to meet demand—at 1,500 trees per acre this quickly adds up to millions of trees. Once a new variety is released it may take another five to fifteen years to reach full-scale production.

Discoveries in science and technology hold promise for one day greatly increasing the number of trees produced in a year, producing healthier trees, and ensuring that growers receive the exact cultivar they ordered. It may even be possible to shrink the timeline for scaling up commercial production of new cultivars.

The art and science of developing tree fruit that meets the evolving demands of a changing world depends on innovations like those of Evans, Peace, Main and the rest of tree fruit research community at WSU. No doubt it will also depend on discoveries yet to be made by the students they mentor.

Read about the newest apple release from WSU.